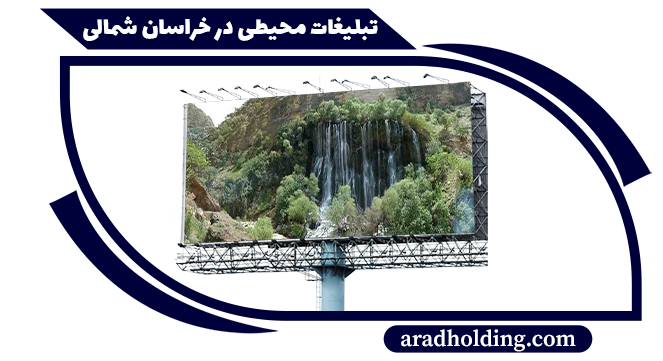 Billboards in North Khorasan are options that can have a significant impact on the growth of businesses. North Khorasan is one of the key cities in Iran in the field of advertising. Due to its geographical location and road connections with the surrounding cities, it is a very favorable platform for displaying billboard advertisements. Due to its population and different tastes, this city has received a variety of advertisements. The city’s highways, boulevards and air bridges provide great places to put up billboards. Some argue that despite digital advertising, which is very popular today, billboard advertising is not very effective, while the opposite is true. Many businesses and brand owners seize the opportunity and use highways and roads to promote their products and services.

Until 2004, North Khorasan province was considered a province along with Razavi Khorasan and South Khorasan. But with the approval of the government, it was divided into three independent provinces.

Billboards provide a strong link between the viewer and the advertising content. This feature has the ability to touch, scan and communicate physically and digitally with the viewer.

Khorasan province has eight cities, which are as follows:

The capital of this province is Bojnourd and it is one of the most populous cities.

The importance of environmental advertising in North Khorasan

North Khorasan is a relatively rich land in terms of natural resources. Due to its mountainous structure and abundance of water resources such as springs, rivers and streams, this province has valleys that have always been considered by human groups throughout history. The most important river in this province is the Atrak River, which has created very beautiful areas around it. This province attracts a lot of tourists in terms of history and antiquity. The petroglyphs of Nargesloo village, Sarband ancient site, Kalateh Mostofi hill, Kohneh Qaleh hill and Senjed hill are among the historical and scenic areas of this province. Some of these works date back to prehistoric times. Apart from these monuments, there are historical places such as the ancient site of Takht-e Qaleh and the hill of Kuh-e Kemar, which date back to early Islam. This shows the importance of this region.

Despite the historical and tourist areas in North Khorasan province, many tourists travel to this area. Those who are interested in visiting historical places, will definitely visit these places. Billboard companies take advantage of this space and position to display billboard ads.

It is important to note that there are basically places for billboard advertising where traffic is high. Companies and industry owners take advantage of these opportunities and help their business grow.

William Bernbach (August 13, 1911 – October 2, 1982) was an American advertising creative director. He was one of the three founders in 1949 of the international advertising agency Doyle Dane Bernbach (DDB). He directed many of the firm’s breakthrough ad campaigns and had a lasting impact on the creative team structures now commonly used by ad agencies.
DDB grew to become the 11th largest advertising agency in the United States by 1976, when Bernbach stepped aside as chief executive officer to become chairman of the executive committee.

Billboards in North Khorasan do not have a single tariff. Prices will vary depending on factors such as location and time. Contact Arad Holding Consultants for advice and information on the exact price of the billboards.